When we were told that Dylan has low muscle tone, I did some research.  I wanted to do something fun with him that would help the tone and that's when I discovered therapeutic riding.  I went to the Professional Associates of Therapeutic Horsemanship International and found what was to be our new home.

The first time we went out, the owner K, introduced Dylan to her miniature pony. This is a good way for her to see how a child reacts to the animal and whether or not they would be a good candidate for therapeutic riding.  She immediately showed me that helicoptering was NOT welcome in her stable and I really had to reign (pun intended) myself in.  Dylan's love of animals overtook his shyness and he started riding a few weeks later.

He showed himself early on to be quite the horseman.  He progressed from a beginner horse, to the next level to the youngest and feistiest of the horses.  We've been told on several occassions that he has a "natural seat".  Meaning that he is a nature rider which is interesting since one of his birth names means "Cowboy".

He loves to ride.  He loves his horse B.  Even though the work makes him sore sometimes, he just loves it.  He has struggled to maintain his attention while on the horse but since we've introduced the medications, it's made a world of difference.  The owner, K, has done Dylan's therapy the past few weeks while his therapist was on vacation.  She was blown away by the change in his attention span the medications made.

This weekend was a fund raiser for the stable.  Dylan (with our help) raised $150 for the stable and $100 in an ad sale.  He understands that the money will help feed "his" horse and keep him warm in the winter.  At the fund raiser - all the children riders and groomers (they have a grooming program for people who can't ride) demonstrated their abilities.  Dylan rode through 10 stations and was at the top of his game.  I was so proud I thought I'd burst.  Then, at the end of the ride, they annouced that Dylan was working hard with his horse, B, and that he's working on improving his attention.  Then they gave him a trophy, a ribbon and a certificate.

Oh wow.  A trophy.  If he could have slept with it, he would!  He held it all the way home telling us "I love my trophy!".  We reminded him that he got the trophy because he earned it.  He worked so very hard and we are very proud of him and his accomplishments.  I'm surprised we didn't get pulled over from the light that must have been coming out of our car windows from him beaming!  More important than his basking in the approval of his parents, he was basking in self approval.  He was proud of himself.  More than I've ever seen before.  In addition to improving his gross and fine motor skills, improving his tone, he discovered accomplishment.  He discovered pride and self worth.  He discovered the rewards of a job well done.

Congrats to my little equestrian! 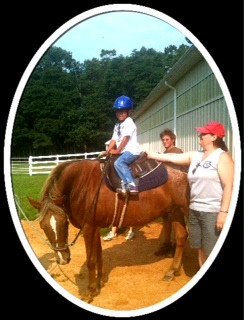